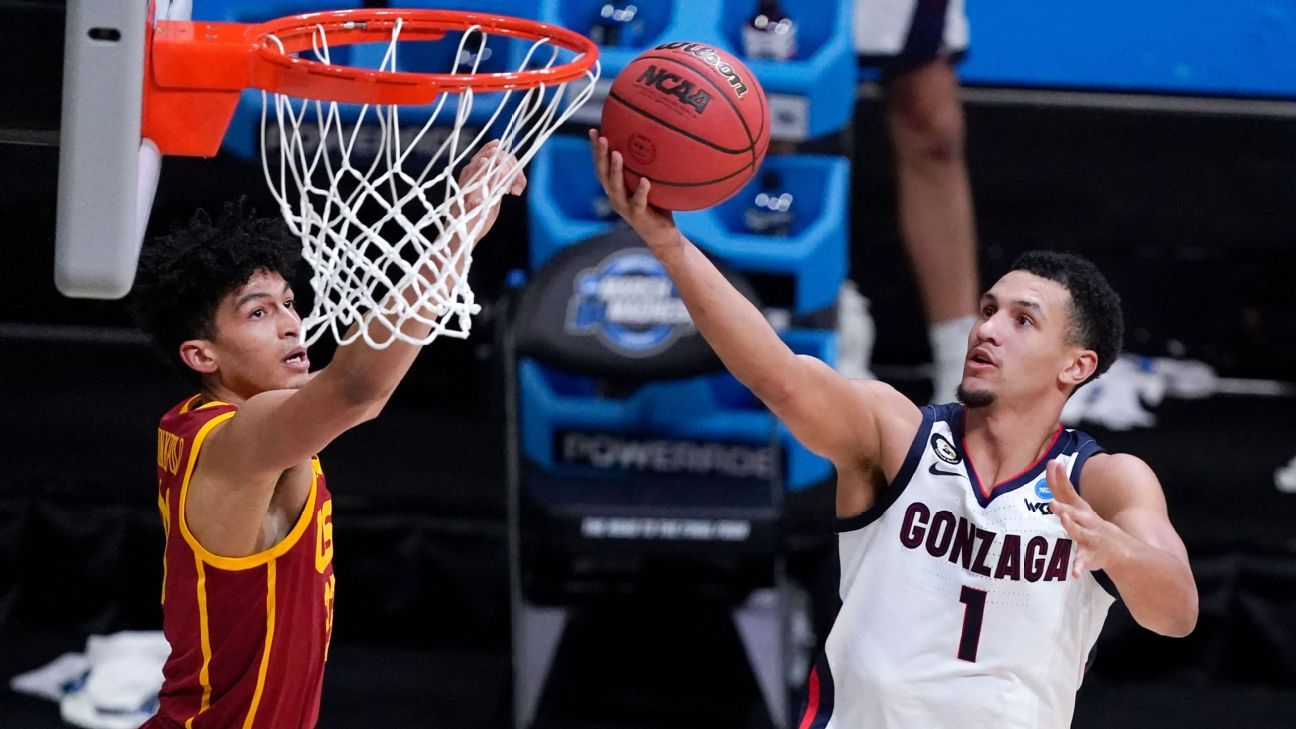 About 24 hours prior to leading his team to the men’s Final Four and a 30-0 record, Gonzaga star Jalen Suggs FaceTime called his good friend and Connecticut star Paige Bueckers just after she had carried the Huskies to the women’s Final Four with a game-high 28 points in a 69-67 win over Baylor in San Antonio on Monday.

Suggs said he’d planned to congratulate Bueckers — the two are both former high school stars from Minnesota — for the achievement but instead left their conversation feeling inspired for his region final matchup the following night.

“Last night, [Bueckers] said some things that really helped me,” said Suggs, who finished with 18 points, 10 rebounds and eight assists in his team’s 85-66 win over USC in the Elite Eight. “I’ve been kind of struggling, trying to get my footing in these tournament games. Of course, seeing her go out there and play great like she did and then talking afterward … she kind of said some words, it kind of got me uplifted, got me going. Definitely helped tonight.”

Suggs entered Tuesday’s game with 14 turnovers combined in his three previous contests. He finished against USC with three, his lowest tally in the NCAA tournament. While he showed poise in the Elite Eight matchup, he lacked that calm watching Bueckers’ game on Monday.

Suggs said he was “extremely nervous” and “pacing back and forth” until the final buzzer.

Now, Suggs and Gonzaga will take the next step toward completing the first perfect season since the 1975-76 Indiana Hoosiers achieved the feat. Since then, the four teams that entered the NCAA tournament with a perfect record — Indiana State in 1979, UNLV in 1991, Wichita State in 2014 and Kentucky in 2015 — failed to win the national championship.

But coach Mark Few said his team is not focused on history. He said he wanted his team to celebrate its Elite Eight victory and then move on to its next game against either Michigan or UCLA.

“Everyone wants us to keep moving forward, but that’s not how we roll,” he said after the game. “This is a heck of an accomplishment. We’re going to take it and savor it for what it is. That doesn’t lessen our desire to win this game, the next game or win two more games. We’re wise enough to know these are really, really special times. These are great accomplishments, and they need to be celebrated. That’s how we’re approaching it right now. Enjoying the heck out of it.”

Tuesday’s game was an impressive showing by the Bulldogs against a USC squad that had dominated Kansas and Oregon on its way to the Elite Eight. But a Gonzaga team that made 50% of its shots and outscored USC 46-32 in the paint overwhelmed the Trojans.

Now, the pursuit of perfection continues.

Suggs entered the postgame news conference with a souvenir around his neck: Few had given him the largest piece of the net he cut down after Tuesday’s win. Suggs said he wasn’t sure if he was supposed to wear it around, but Few told him to “keep it.”

While the team isn’t looking too far ahead, Suggs said it’s difficult to avoid considering the possibility of an undefeated season.

“It’s hard not to think about it,” Suggs said. “We try to keep our minds off of it and keep focused on the task at hand. It’s a great accomplishment to be mentioned with those teams because they’re amazing. Again, we just come in every day to play to the Gonzaga standard and for each other. I mean, this is the result that we get from that.”